China’s Ministry of Ecology and Environment (MEE) has just finished drafting the country’s first Five Year Plan for marine environment protection. The final plan is expected to be released by the end of this year.

The fact that the MEE has been able to create such a plan speaks to the far-reaching impact of 2018 ministerial reforms that re-organised China’s marine governance system. The reforms brought marine environment and ecology conservation functions that were previously scattered across six other ministries into the MEE – China’s top environmental agency. Before them, the fragmented system had made coordination difficult. Government departments responsible for the marine environment could not, for instance, regulate rivers or land-based industries that sent massive amounts of pollution to the sea. Now the MEE can safeguard every body of water in the country against pollution.

In the same vein, the 2018 ministerial reshuffle also streamlined land- and sea-based spatial planning, putting them both under the new Ministry of Natural Resources (MNR). Spatial planning is an important tool for marine conservation, defining the boundaries of human activities that affect nature. The MNR now hosts four departments with responsibilities over spatial planning and marine conservation. Most importantly, the ministry is now in charge of drawing up “ecological redlines” both on land and in Chinese waters. As such, development and conservation activities within those redline areas will be regulated by a single government body, preventing different localities from carving up the ocean for their own self interests.

China’s numerous types of protected areas are also being streamlined. The National Forestry and Grassland Administration (NFGA) under the MNR is in the process of simplifying and regrouping protected areas into a three-tier system: national parks, nature reserves and nature parks. The establishment of the Changdao Marine National Park, for instance, is an attempt to merge the existing protected areas, previously divided by land- and sea-based management, into a single entity: a national park overseen by the NFGA.

The only area of ocean governance that did not go through streamlining in the 2018 ministerial reshuffle was fisheries management. The Ministry of Agriculture and Rural Affairs (MARA), with the Bureau of Fisheries under it, remains the agency supervising China’s massive fishing fleet, which roams both its national waters and the high seas. The country’s numerous aquatic germplasm resources reserves are the only type of protected area not under NFGA control. 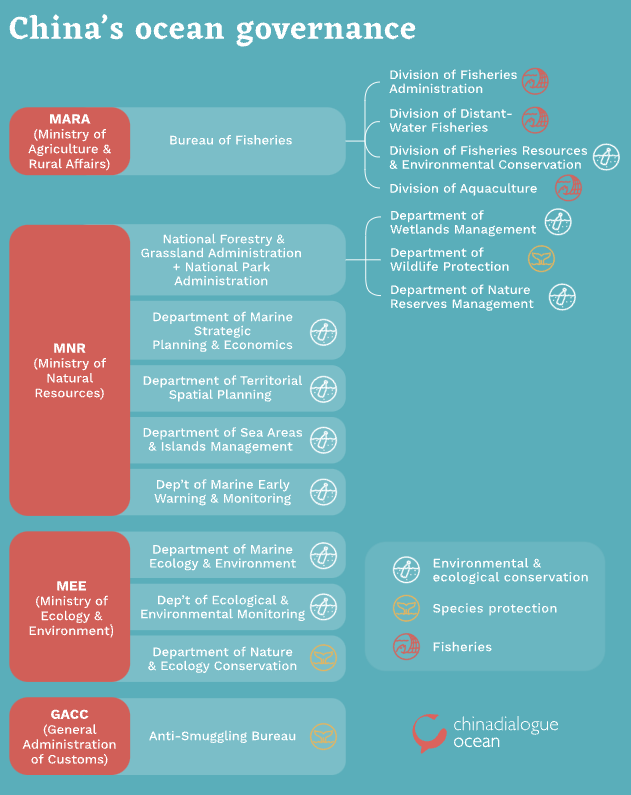 Similarly, the Bureau of Fisheries retains the responsibility of managing all endangered aquatic species, while the NGFA takes care of animals on land. An expansion of China’s list of key protected wild animals in January this year added 65 new marine species, including the spotted seal and Indo-Pacific humpback dolphin. A total of 104 are now under the protection of MARA. In support of this newly expanded work, MARA recently set up an information management system for protected aquatic species. It will monitor their status and share key information with other ministries, such as the General Administration of Customs, which regulates the trade of endangered species.

While the reforms have done a great deal to improve China’s ocean governance, problems do still remain. By bringing functions originally held by multiple departments together under one roof, there is a greater need for better internal coordination. But the new approach is already strengthening the country’s ability to deal with the many challenges facing the world’s oceans, from overfishing to climate change and pollution.

This article appears courtesy of China Dialogue Ocean and may be found in its original form here.